Dismiss Staff members at BHC's Home Office are operating in a hybrid environment (working some days from home, and some days in the office). Before visiting 23 W. Broad St., call to verify that your contact is in the office. Thank you!

The Golden Hammer Awards celebrate excellence in neighborhood revitalization. The panel of judges will review all projects nominated for a coveted Golden Hammer Award, select finalists to be displayed on BHC’s website for a public voting phase in April and May, and add their votes for best in each category based on a weighted list of criteria. 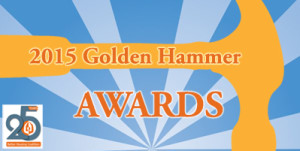 Winners will be announced on May 21st at BHC’s 25th-Anniversary celebration, TransformRVA to be held at the Omni Hotel with keynote luncheon speaker, The Honorable Henry Cisneros (former Mayor of San Antonio and former HUD Secretary).

“There are so many creative solutions to community development in our region,” said David Herring, BHC’s Director of Single Family Homes and coordinator of the Golden Hammer Awards. “We’re really looking forward to reviewing all of the submissions this year and sharing them with the public for their input.”

To be considered for a Golden Hammer Award, neighborhood revitalization projects must be located within Greater Richmond (Richmond or Henrico, Hanover and Chesterfield Counties), have been completed during 2014 and must be submitted online by midnight on April 10, 2015. For more information and to submit a nomination for the Golden Hammer Awards, click here.