Dismiss Like everyone else at this unprecedented time, BHC is making adjustments in work processes to protect staff and residents, and prevent the spread of the Coronavirus. Click here to see what we're doing.

North Church Hill was once a thriving neighborhood with a rich mixture of residential, retail and commercial activity. Today the community has the highest density of poverty in the City of Richmond, particularly in the areas north of Broad Street along the N. 25th Street corridor. We saw an opportunity to help bring it back to life. Since 1996, with the help of many public, private and individual investors, we have invested $45 million in North Church Hill.

Since 1996, BHC has developed more than 120 single-family homes and 50 high-quality rental homes in Church Hill. See some of our developments below.

“Healthy neighborhoods with affordable homes are the essential anchors of the City’s economy. Church Hill’s time has come, its star is rising, and the Better Housing Coalition is making a shared vision become a reality.”

Jefferson Mews: a catalyst for renewal 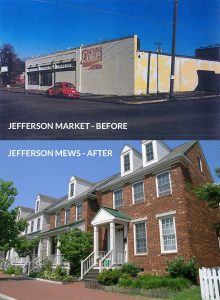 We first saw North Church Hill’s potential in 1996. A shuttered grocery store at 25th and Jefferson streets was an eyesore and attracted vagrants. BHC acquired the property and worked with nearby residents in the planning process.

The result: Jefferson Mews, an attractive, mixed-income block with 29 homes for sale and rent. We preserved the historic homes on the site and built new ones that fit in with the neighborhood character.

As with all of our developments, shortly after we cleared the blighted site, we started to see changes in nearby homes. Builders and renovators purchased homes to improve and re-sell, and homeowners and landlords started repairing homes and increasing the curb appeal. We were the catalyst for renewal throughout the neighborhood.

Today, the neighborhood is transformed. Retailers, restaurants, and professional services add vibrancy. We continue to manage the rental properties at Jefferson Mews.

“BHC knows what city dwellers want: walkable, sustainable neighborhoods with small businesses alongside residential development. Years ago, BHC had the guts to believe in a community that was struggling to rebuild and repopulate. Thanks to BHC’s leadership and collaboration, the quality of life in Church Hill has improved beyond what any of us dared to dream.”

The Beckstoffer’s Block: From lumber mill to a mixed-income, multi-generational development 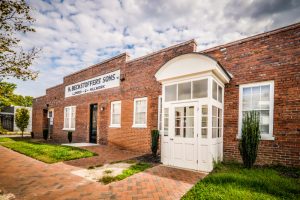 In 2011 we took the opportunity to make a big impact in our target zone by acquiring the defunct Beckstoffer’s lumber mill and nearly an entire City block around it. We renovated the historic millworks building to create 22 mixed-income loft apartments. In the same block, we created 39 eco-friendly apartments for low-income seniors, seven of which are designed to be net-zero energy.

The mill development garnered national recognition from the Affordable Housing Tax Credit Coalition, winning the Charles L. Edson Tax Credit Excellence Award for Green Housing; the Urban Land Institute, which named it a finalist for its Jack Kemp Excellence in Workforce Housing Award, and a National Housing and Rehabilitation Association award for exceptional real estate preservation. The Beckstoffer’s development has also won a number of state and local awards for energy efficiency and sustainability. 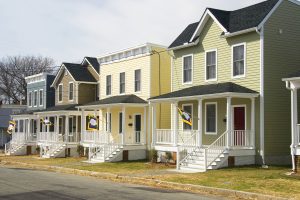 BHC sells almost exclusively to first-time buyers, many of whom become the first in their families to own homes. We coordinate with the buyers to help them secure funding for down-payment assistance. Our typical homebuyer is a young family with the head of household working nearby and an annual income of less than $50,000.

To ensure long-term stability, we require buyers to take a personal finance and homeownership class to understand budgeting, home maintenance, taxes, insurance and other important aspects of home ownership. With this educated approach, we have had only a handful of foreclosures over the years.

We are committed to building energy efficient, aesthetically pleasing homes that fit into the neighborhood character. Good architecture and workmanship attract qualified buyers and renters as well as other developers. When renovating historic homes, we seek historic tax credits, which can reduce the owners’ tax liability for several years.

“I love what’s happening here—it’s becoming a real community. I used to make home visits to patients all over Church Hill, and seven or eight years ago it wasn’t what it is now. I love that I can walk to Chimborazo Park and see the river and the city. It reminds me of the Promenade in New York, and the apartments remind me of SoHo.”

The Goodwyn at Union Hill – Our Work Continues

In the past 20 years, we have seen a flood of private investment in Church Hill. The resulting new shops, restaurants, and housing development have grabbed the attention of professionals and young families interested in living in a dynamic urban setting. With this new-found popularity, however, comes and unintended consequence: apartment rents and home prices have risen out of reach for many of our neighbors. Because of the groundwork we laid so long ago, we feel partially responsible for the community’s resurgence; and are committed to carving out a space for both long-time and new residents of modest income who, like so many others, are attracted to the neighborhood’s amenities and with to stay (or move) there.

In 2015 we purchased the former Citadel of Hope building and surrounding parcels of land on Venable Street in Union Hill. The Citadel is a historic Colonial Revival-style building constructed in 1923 by the Baptist Woman’s Missionary Union. The Citadel is a venerable and long-neglected building which has been a sleeping giant awaiting renewal for decades.

Through a combination of renovation and new construction, the Citadel, renamed The Goodwyn at Union Hill in May 2017, opened in February 2019, bringing 52 units of affordable housing for working families. Attesting to the great need, BHC received 150 applications for the 52 units at The Goodwyn.

The Catalytic Effects of Our Investment

Between 2010-2019, our investment in housing in North Church Hill will have*:

*Based on data extrapolated from Housing Virginia

We salute with deep gratitude the generosity of the following supporters
who have made this community transformation possible: