Dismiss
Staff at the Better Housing Coalition's home office at 23 W. Broad are currently working hybrid schedules (some days in the office, some days from home). Before visiting, please check to make sure your contact is onsite. Thank you! 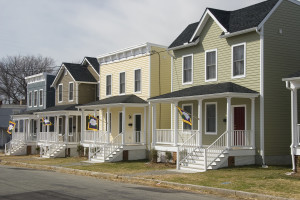 The Better Housing Coalition (BHC) has raised more than $2 million in matching funds to complete a $1 million, two-for-one challenge grant awarded the organization by The Cabell Foundation in November 2012. BHC was given until June 30th to raise $2 million in public and private donations, which triggered an additional $1 million gift from The Cabell Foundation. The challenge grant leverages a total of $3,252,442 in philanthropic gifts that are helping to underwrite BHC’s continued efforts to increase and preserve the stock of affordable housing for lower-wealth families in Richmond’s East End.

Matching donations received include $568,717 from 29 individual donors; $553,725 in foundation funding and $1,130,000 from corporations and public entities. At the time of the award, the grant was the largest issued by The Cabell Foundation and remains the largest gift ever received by BHC.

“Our goal from the outset of the campaign was to preserve and/or produce 150 homes in a 10-block target area of Church Hill,” said Greta Harris, president and CEO of the Better Housing Coalition. “Thanks to The Cabell Foundation’s extraordinary challenge, we have produced 134 homes so far. By the end of 2015, we will have exceeded our goal.”